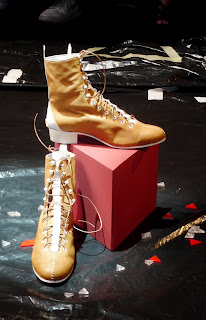 A shimmering silvery runway, spotlit with pedestals sportin’ what we call streetwear/ lifestyle shoes (we assume a collaboration with show sponsor Reebok)…had us thinking, okay this is going to be an edgy urban collection.

So NOT in the way we were thinking.

After the show was over--- we thought it all got ‘Lost In Translation.’

And chatting with other fashion editors – from Europe---they seemed baffled too… by what transpired on the catwalk…and they weren’t going to write up the show.

But, our brain cells were churning so we were not dismissing Patrick Mohr’s S/S 2010 to the back burner

…and maybe that was the point.

Clearly there was a “statement” being made here. We just didn’t know what it was. 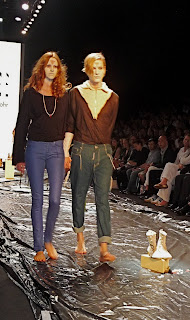 Later, we did some homework and learned that the cat walkers, while obvious that most weren’t professional models…were homeless and lived in shelters.

So we guess that there were philosophical underpinnings mashed up in the presentation here.

The models themselves were wearing the denim from Mohr’s line with Quadrangle Jeans –there wasn’t a ‘run-of-shows’ – but we figured this was the retail angle…as well as the footwear. 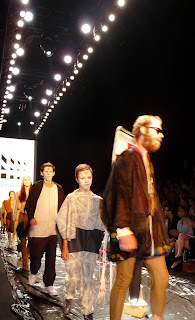