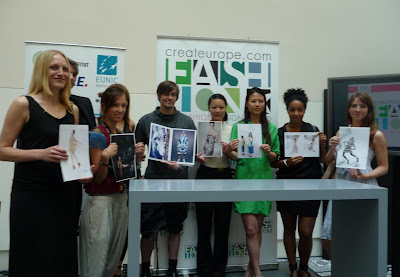 One of the many reasons we love Berlin…and the Fashion Week that’s a bi-annual gig…is that Germans GET the importance of the “creative industries” and the “culturally economy.” And the financial one, we might add.

That’s why this fab city goes all out for attendees who descend on this great metropolis for the dynamic convergence of runway and tradeshows…and exhibits, openings, etc.

We saw the Mayor several times, dapper in his suit...and it was toasty over there…without the American style A/C blasting away.

There were German celebs galore...not that we knew who they were…and some international personalities like Justin Timberlake, Diane Kruger and Sienna Miller.

Helping to keep Germany as a draw for young talent is the createeurope: The Fashion Academy Award --- sponsored by the Goethe-Institut and EUNIC (Association of the European Institutes for Culture)…to further German and international fashion designers. There’s an age limit of 32 for this year's over 1000 applicants---with 30 finalists selected.

The grand finale, a catwalk show with six outfits per…is scheduled for October 2009.

There was a press conference…in German. Duh. But we got the 411 that the award is particularly critical for young talent in times of financial crisis...and how important the creative process and innovation truly is---to the biz.

ADDED PLUS: Designer Dirk Schönberger, Creative Director of Joop is the “patron saint.”