Sunny skies and warm weather brought out attendees at Sundance’s annual Film Fest-who got up to watch Obama's swearing in.

At the Gibson Guitar Suite…we made connections with two terrific accessory lines that are completely different…one eco…and one gee whiz technology driven. 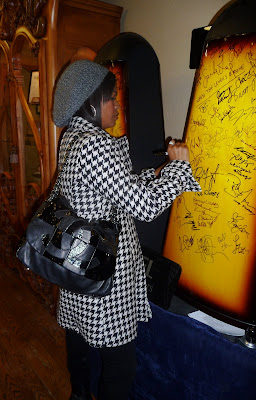 Actress Nia Long signing the Gibson Guitar to be auctioned off

Hailing from Seattle, Screamers goes green for its latest Winter and Spring collections of warm hats that found BIG FAVOR with celebs dropping into to the exhibit.

Designer Kelly Kemp (a vet at the company who started in the warehouse) told us Screamers eco launch sprang from a desire “to source bamboo for hats.”


This family run biz (Jan and Steve Burkholder) is small in size but boasts a rainbow assortment of color options…and has a whole line custom hats too! 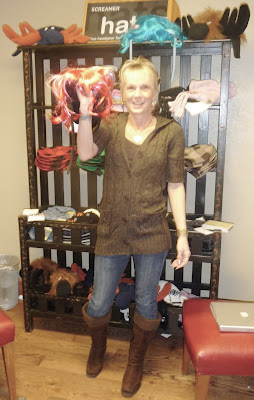 WHAT’S ECO HIP: For kids, Kemp told us- the lumberjack plaid hats with earflaps is it. Adult gals rocked the modified ribbed newsboy looks in grey/black.

And funny enough, the Fake Hair and Moosehead hats got a lot of wear when factored in with alcohol.

We got schooled at the SWANY exhibit of ultra high tech performance gloves and mittens…and it wasn’t just that the acronym stood “FOR SELF FOR SOCIETY FOR THE WORLD.”

A clip in the New York Times generated a buying frenzy of the new G. Cell Bluetooth Glove-that has a fully integrated Bluetooth system …with handy call buttons and even voice activated (WOW) know-how is “the first hands free cell phone glove for skiing and snowboarding.” 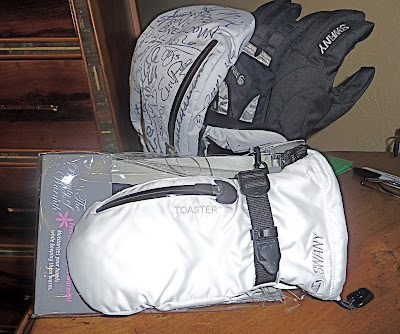 We got to demo the performance mittens that are basically “built on the concept of a two in one glove” according to the congenial William V. Dzierson, Senior Vice President. ..with a leather outer shell and stretchy liner.

We got a demo…with Skintex® sprayed on, rubbed on (lasts 5-6 outings) and viola, Instant warmth. Apparently Skintex® enables the lining to keep the heat via mechanical energy (moving around) and reflecting body heat.

We were thankful to have a pair of “Toaster” white leather glove/mittens combo…cause a week later… we went snowboarding in white out conditions…with three feet of the new fluffy stuff. Our hands kept warm throughout…and the handy zipped top that allowed us to use our fingers while strapping buckles…was a GIFT!

We felt ourselves wishing SWANY® made socks too!
SWANY®